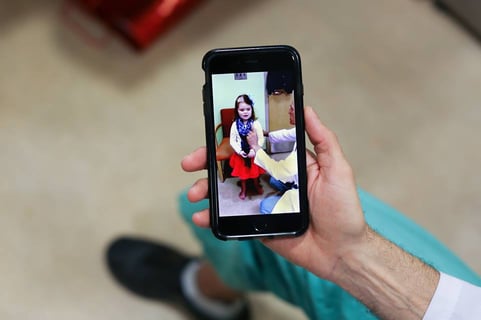 If you follow Humans of New York (HONY) on Facebook – and with more than 17 million followers, I expect you do – then you’ve been inspired by and often heartsick over this week’s stories told from the Pediatrics Department of Memorial Sloan Kettering Cancer Center.

As founder Brandon Stanton put it, “Obviously these are not going to be easy stories to read. These are war stories. The treatment of cancer can be nearly as violent as the condition itself, and even the doctors will frame their efforts in terms of warfare. But the fight against pediatric cancer is uniquely tragic because the battlefield is the body of a child.”

The stories are of a battle no one wishes on anyone, let alone their own child. But it’s a series that’s also putting a spotlight on the physicians and researchers behind some of best new therapies and treatments in pediatric cancer. Often behind the scenes by design, HONY is telling their stories.

Those of us in health care and life sciences hear these stories often. We experience triumphs and even failures first-hand.

Here’s a recent post that speaks to the heart of clinical research and those making it their lives' work:

“In May of 2012, I finally got approval to conduct a clinical trial. A family flew up from Florida with their child Caitlyn. I was so nervous. I’d written so many elegant papers. I’d conducted so many trials on mice. I’d done so many tests in the lab proving that this could work. But here I was looking at a human child. Am I really ready? The spotlight was unbelievable. If I kill this child, it will decimate me emotionally. And the institution’s reputation was on the line. Had I done enough? Had I prepared enough? All these things were running through my mind as Caitlyn’s mother signed the consent. But when she finished, she turned to me and said: ‘Whatever happens, thank you for trying.’ And I still get emotional when I think about that. Because she took so much weight off me. The operation was a success. This is Caitlyn a week later. She could walk! She could jump! She could touch her nose! She lived for a year after that, but then her cancer came back and killed her. It was so hard for me. I was so close to her family. But right now I’ve had about twenty successful trials. That’s twenty living children. One young woman has been alive for three years. Every passing day that those children are still alive is the greatest day of my life.”

Thank you HONY for telling these stories and for raising money ($2M so far) to fund future breakthroughs. If you’re not following this series, it’s well worth your time.

You can catch up here.