Patient Recruitment From The Patient's Perspective

Patient Recruitment From The Patient's Perspective

“We need more information; it’s what we’re craving for. We want trials to succeed; we want to be a part of the overall understanding of our disease, work with us.” – Jeri Burtchell 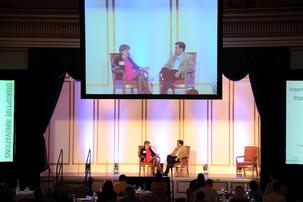 That was the message from Jeri Burtchell in front of hundreds of pharma and patient recruitment industry leaders at the Disruptive Innovation Conference in Boston. Jeri has been living with MS since 1999, and she recently participated in a clinical trial. Once Jeri made the decision to join a trial, she started blogging about her experiences and eventually other patients in the trial found her blog and they began to sharing their experiences. This is obviously something the clinical trial industry fears, but Jeri says there’s nothing the industry can do about it, except to inform patients of the pros and cons of sharing their experiences. “We’re going to find each other.” At the conference Jeri and I sat down to talk more about her clinical trial experience. Here is our conversation.

BBK: Why did you decide to enroll in a clinical trial?

Jeri: I decided to enroll in the clinical trial because my relapsing MS was so aggressive that my quality of life was quickly diminishing. I didn’t want to try any of the other available MS therapies at the time due to their known side effects. The trial appealed to me because  there was no placebo involved. It was a head-to-head double-blind/double-dummy trial in which Fingolimod (now Gilenya) was compared to Avonex®.

BBK:  What were some of the fears you had about enrolling in a study?

Jeri: I have always been a hypochondriac so my fears were many. I was afraid of having side effects that had never been seen before. I was afraid the tests would be invasive or painful. I hate MRIs because I’m claustrophobic, so I was afraid of laying in that tube. I was scared I would have some weird side effect that demanded immediate medical attention but because it was an investigational drug and I lived so far from the study center (a two hour drive) that I would not get proper medical attention. I was afraid I would be getting the real Avonex and have flu-like symptoms that are common to interferons.

Jeri: The first day was exciting and scary at the same time. I knew in advance that there would be a six hour observation period on Randomization Day. I was allowed to camp out in a conference room that had a dvd player and a big screen TV. I brought my sister along for moral support and we packed a picnic lunch in a cooler. The first physician’s visit was full of testing. I have never in my life had a doctor that was so attentive to every detail of my health, or one that hung on my every word. I left feeling thoroughly examined and certain that if there was even one teeny thing out of whack they would have discovered it.

BBK:  What would you say to someone who is interested in clinical research but a little scared to take that step?

Jeri: If someone were hesitant to enter a clinical trial, I would tell them to go for a visit and find out if they qualify for the study. At that point, you would be given the informed consent. That’s a big document that outlines every resulting side effect or adverse event that may be attributable to the study medication and whether it’s reversible and/or avoidable. It’s an intimidating document, however it will provide you with the most accurate information you can get anywhere about the drug you might be taking. Have someone you trust, (in the health care field ideally) read the document with you and get their reaction. While it’s only human to want to ask family and friends what to do, or reach out via social media to get other opinions, remember that once you have read and understand the informed consent you already know more than any of them will. Stick to the facts and try to avoid the emotional reactions others might provide, however well- meaning.

BBK: What can the pharma industry do a better job of in terms of supporting patients when it comes to clinical research?

Jeri: I would tell the pharma industry that once they have moved to human trials they need to take into consideration that their subjects have lives outside of research. We have families, jobs and responsibilities. In order to retain patients in their studies, they need to make the least impact on all of the other areas of a person’s life outside of the trial and related testing. Things like providing child care during study visits, transportation if necessary, gas/mileage reimbursement, meal tickets, a day’s pay for a day’s lost wages. Combining multiple tests into a single day’s visit rather than requiring multiple trips to the center resulting in more gas and lost wages.

Pharma  also needs to come to terms with the fact that as humans we are social creatures. We are going to use social media to find each other and share experiences. Trying to prevent this interaction by prohibiting it in the informed consent won’t work. People are still going to interact.